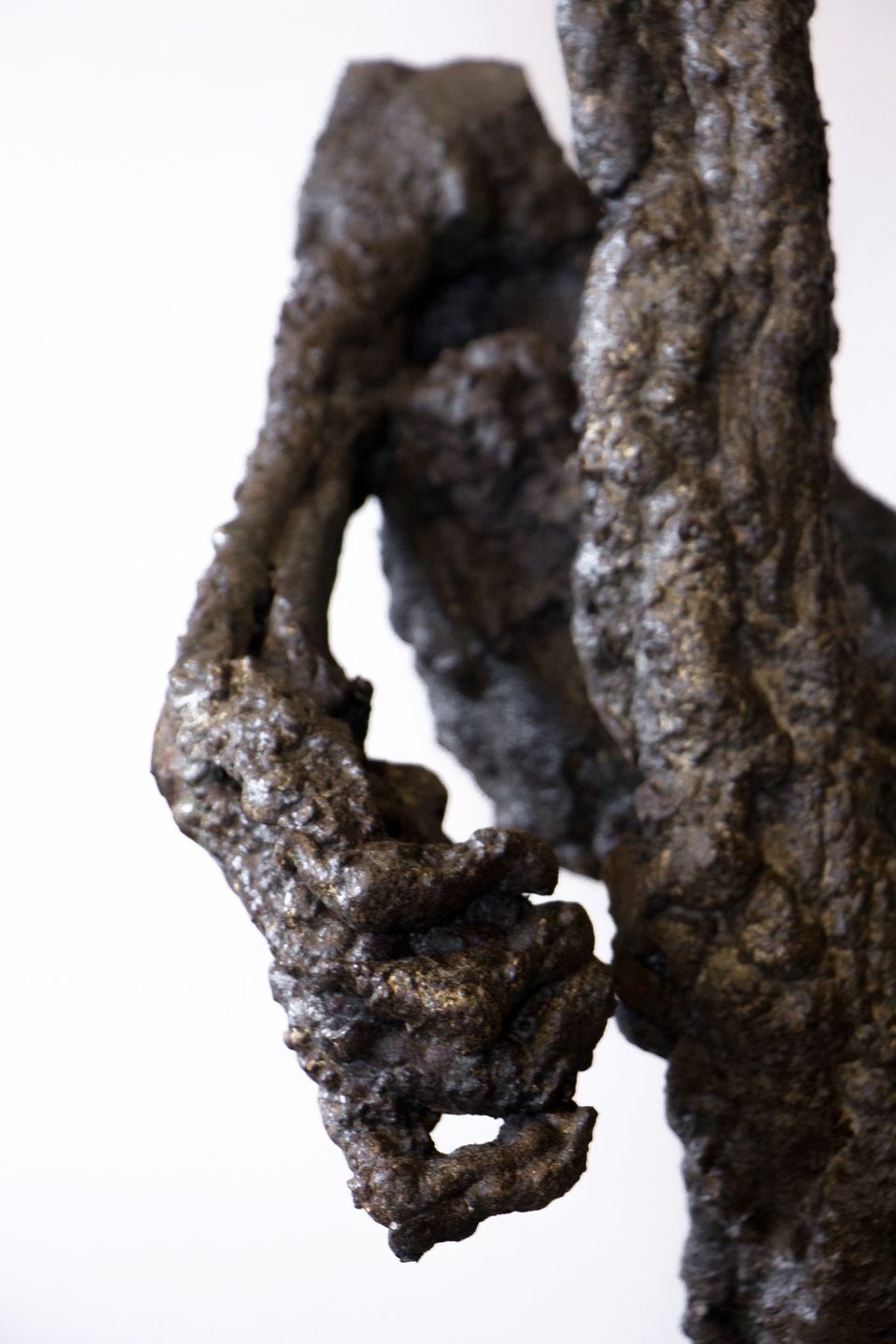 They Are Still Here comes in the place of an expected jubilee exhibition. An exhibition to historize a creative biography, showing the works of the artist accumulated in warehouses and exhibited in public triumphal spaces and private villas on the azure shores, created over the years. Turning 60 could be an occasion for one of the so called “retrospective exhibitions”, which is the way we are accustomed to call the attempt to collect and arrange the creative energy that disperses by definition. They Are Still Here cannot be a retrospective exhibition, because it is not retro, it is not turned to the past. A living artist cannot be a historian of himself because he is always one step out of the frame. They Are Still Here can be defined as a prospective exhibition – an exhibition with a focus on perspective. It shows not part of the past, but something in the future that brings the times with it.

They Are Still Here consists of thirteen cast iron figures created over the past few years and never shown before. Cast iron is the opposite of plasticine – the material we use when we want to name the plasticity and malleability of people in the traps of social coercion.
Burned out, desires and dreams remain in the past, but as a negative. The future is possible only if the past is thought of as a fiery tear of space, and time is always a memory of performed traumatization.

But They Are Still Here are also thirteen stills of the current personal state. Thirteen masks of a creative and suffering person frozen in burnt iron. Not only figures, but also frozen states, captured views as in a night torn by lightnings. Figures of the impossible escape – as if the terrified bodies of the inhabitants of Pompeii have been reconstructed in metal. Should we read an expression of helplessness in them? Of despair? Of hope? The last hope before the sinking of the Titanic, when some rely on survival through coquetry and others – through their elbows and fists? The hope of the utopian revolutionary, expecting the right moment when society will reach that point of destruction that will become the first day of the revolution, but was surprised by the eruption of a volcano or a shattering earthquake which engulfs the earth without choosing the good and the bad?

They Are Still Here presents thirteen figures without skin. Thirteen figures without the protection of clothes, but always, even when the muscles are torn, the meat hangs in rags, the wounds are gray and yellow, in those eroded figures, the social mask and the trained etiquette remain. The body sometimes dies within a second, the organic matter is incinerated at 1350 degrees Celsius, replaced by molten metal, but even in the completely frozen imprint, the horrified posture of the social animal remains. A man is always a lot of people, indigent but persistent actor.

The cooled iron, the last phase of this alchemical transformation, the cast iron, is a heavy, hard and fragile state of something that was soft, agile, light and flying.
They Are Still Here is a also continuation of the group of figures from the exhibition The Last Burghers of Calais. Figures associated with infectious helplessness.

Cast iron is an iron alloy with a carbon content exceeding 2%. In addition to these components, the mixture contains a number of constant substances such as manganese, silicon, phosphorus, sulfur and alloying additives. But carbon is a substance that, like steel, is reminiscent of living matter – it is the building block of life (and we call living that which dies). The figures are sometimes treated with rust converters, sometimes welded, sometimes left entirely to the cooperation of moist air.

They Are Still Here presents the current work of Ventsislav Zankov. The excitement and anxiety of the present will affect its perception and interpretation, but it is not an aesthetic response to the current situation in Europe and the world, it is not directly related to pandemic restrictions on human freedoms or to war crimes humiliating what is human.

Ventsislav Zankov was born in 1962. He graduated with a degree in Sculpture at the National Academy of Arts in Sofia in 1988. Over the years, he has been behind many initiatives and curatorial projects, including the weekly [close-up] discussion club in Hambara (2004-2008), the newspaper 39 grams (2005-2008), the Ventsislav Zankov Foundation for Contemporary Art (founded in 2009). ), the Ventsislav Zankov Iron Medal for Contemporary Art (founded 2010), “Everything on Man” (2004-2008) together with the Goethe Institute – Bulgaria, “White, male, straight” project (2002) with the support of Swiss cultural program for Bulgaria Pro Helvetia. Curator for Bulgaria of international video art projects organized by Magmart, Italy (2013-2019).
Associate Professor in the Department of Visual Arts, NBU (2017). Master’s degree in Film and Television Art, New Bulgarian University (2016). Doctor in Art History and Fine Arts (2013). Psychodrama assistant (consultant).