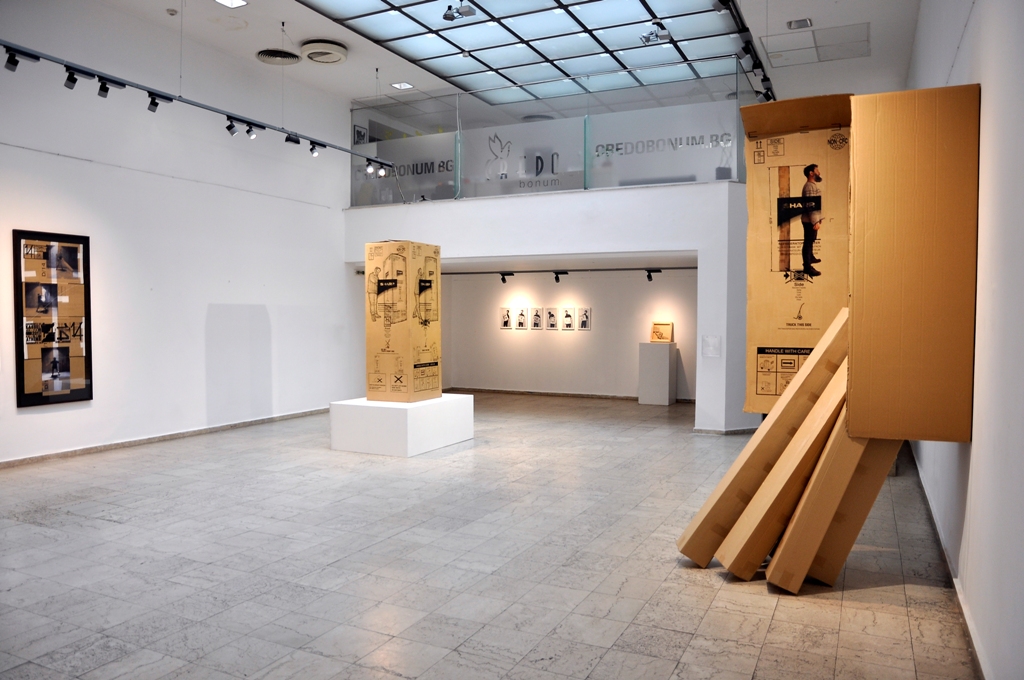 How to Deal with the Object

How to Deal with the Object

“How to deal with the Object”, the exhibition by Alexander Valchev, deals with sculpture – it engages with how the three-dimensional, which is correlating with the human body, exists in space. With an evident self-irony the artist is orchestrating his own competent, intelligent, and well-informed interpretation about how those elements that art has been dealing with since time immemorial, might interact with one another today. The functions of The Object has been awarded to cardboard boxes quite familiar to anyone who has acquired kitchen or bathroom appliances. Regrettably, such boxes are too well known to all those who are pressed by necessity to find shelter in the cities of the world.
The cold geometry of the box – of something self-evident, emotionally inert, industrial, and manufactured to be used up rather than to be made use of, is a challenge for the author. And this is not a lesser challenge for this artist than stone is for a classical sculptor. We are reminded of the description for the art of sculpture, usually ascribed to Michelangelo – sculpture releases the image hidden in the block of stone. Within the exhibition display created by Alexander Valchev the lightweight and “innocent” cardboard boxes somehow manage to get disturbingly close in association to the Obelisk from “2001: Space Odyssey” of Stanley Kubrick. They are pushing our associations even further when one thinks of the tight locker room box where Chris Burden locked himself up for 5 days back in 1971. Alexander Valchev is showing us his efforts in taming the objects – the space appropriating parallelepipeds. He is lifting them, he is carrying them, moving them, rotating them, and depicting them in his self-portrait compositions.
In this show the human interaction with the volumes of space is transformed into a complex dancing act where the energy and the dynamics of the living human body engage with the geometrical statics of the objects in a constant redefinition of their mutual coexistence.

Alexander Valchev was born in 1973 in Sofia, Bulgaria. He lives and works in Sofia. In 1998 he obtained his MFA in Sculpture at the National Academy of Arts, Sofia, Bulgaria, in the class of Prof. Krum Damianov. He received his MFA in Photography from the New Bulgarian University in 2013. In 2004 he was a resident at the Cite Internationale Des Arts, Paris and in 2008 he received a scholarship to specialize at “CCN” Graz, Austria. He realize many solo exhibitions including: “The Sculpture as a Hobby” (2014), curated by V. Mlechevska and “Brick by Brick” (2018) in Arosita Art Gallery, Sofia, BG; “A New Life” (2015) and “We Love the Dogs and the Dogs Love Us” (2011) in Goethe-Institut Bulgarien; “For a Few Dollars More” (2012) in Sofia Arsenal – Museum for Contemporary Art, Sofia, BG and “Reminiscences” (2005), curated by S. Yanakieva, Sofia City Art Gallery, BG. He also participated in international festivals like: “Danube Dialogues”, Novi Sad, RS (2018); “UAMO festival”, Munich, DE (2016); Month of Photography, Vienna, AT (2008); Month of Photography, Ljubljana, SL (2007); Month of Photography, Bratislava, SK (2007). Among the group exhibitions he took part in stand out: “The Reality Despute”, curated by K. Vassilev, P. Tsanev, S. Pamukchiev, Shipka 6 Gallery, Sofia, BG (2017); “In the Labelling Gap”, curated by D. Radeva, Sofia City Art Gallery, Sofia, BG (2016); “Focus Bulgaria @ viennacontemporary” – curated by I. Boubnova and V. Nozharova, Vienna, AT (2015); “Art for Change 1985- 2015”, curated by M. Vassileva, Sofia City Art Gallery, BG (2015); “THE CHOICE /43 art historians – 43 works/, curated by R. Konstantinova, the project curator M. Vassileva, Sofia City Art Gallery, BG (2011); “AWOL”, Biennial of Contemporary Young Artists – 2nd edition, curated by I. Grabovan, Bucharest, RO (2006); “Bulgarian Contemporary Scene”, Ludwig Museum im Deutschherrenhaus, Koblenz, DE (2008). His works are part of the collections of the National Art Gallery and Sofia City Art Gallery Bulgaria.